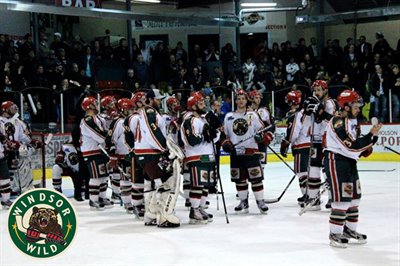 With the arrival of autumn, leaves turn their colours and most of our minds turn to the next thing: Hockey! Hockey season has begun, and no winter in Quebec would be complete without some serious local hockey action. Once winter sucks us all in, we need something fun to keep us going. Enthusiasm for senior hockey is increasingly palpable in the region as the business community, including the city of Windsor, engages more each year to support our local teams. So it is with great pleasure that all of us here at HWP - Herwood Inc. proudly announce our sponsorship of the local Senior hockey team; the “Windsor Wild!”

With a great roster of local players, a reputation to uphold, and a passion for real hockey, we look forward to an exciting and successful season of hockey with the Windsor Momosports/Wild this year. With the return of last season’s coaching staff, plus a new third coach, the red and greens will have the added advantage of an external view of their game and play analysis by the new coach. More eyes mean sharper plays!

The team will officially begin their season on Friday, October 3rd at the Plaza Marieville, JA Lemay Centre at 20 h 30. To launch the 2014/2015 hockey season, management and players of the Windsor Momosports/Wild invite the public to their traditional pre-game "Tail Gate Party," to be held in the arena parking lot at 18h, before Friday’s game. It will be a good time to talk with fans, meet club members and to purchase tickets for the game that will follow in the evening, or to grab your season pass for only $60.

If you’d like to take in the home games, we’d love to see you at the Arena Centre J.A. Lemay at 250 Rue Georges-Guilbault, Windsor, QC. You can also head over to the Windsor Wild’s Facebook page to check out their latest information, schedules and happenings. It is important to send-out a big ‘’Thanks’’ to the many supporters who attend every game, either at home or on the road. Your support makes a big difference. Hope to see you all at the rink this year!